Last spring, Keaton Funderburk ’22 joined the ranks of scientists interested in REGγ, a proteasome activator that works to degrade unnecessary or damaged proteins in the body. Scientific attention has recently shifted to REGγ because of its role in cancer, aging, and neurodegenerative disease. However, due to REGγ’s elusive nature, research on the proteasome activator has been wide-ranging and inconclusive. In an article titled “Regulation of Life and Death by REGγ” — published this past July in Cells, an international journal of cellular and molecular biology — Funderburk reviewed the research findings to form a more coherent narrative of what is currently understood about REGγ.

There have been more than two hundred publications about REGγ, each attempting to understand its purpose. Professor of Practice in Biochemistry Henry James Li Xiaotao, who supervised Funderburk’s research, said there is still much to understand about REGγ’s functions and regulatory mechanisms. “You cannot just describe REGγ’s function in one or two sentences,” he said. “For example, it has a function to promote cancer. But it also has functions involved in aging, immune response, neuron degeneration, and metabolism.”

“I think it is a good contribution to this field to summarize the major functions of REGγ into life and death,” said Li. “You have to have some kind of recreation, to make people who are not very familiar with this field understand easily.” 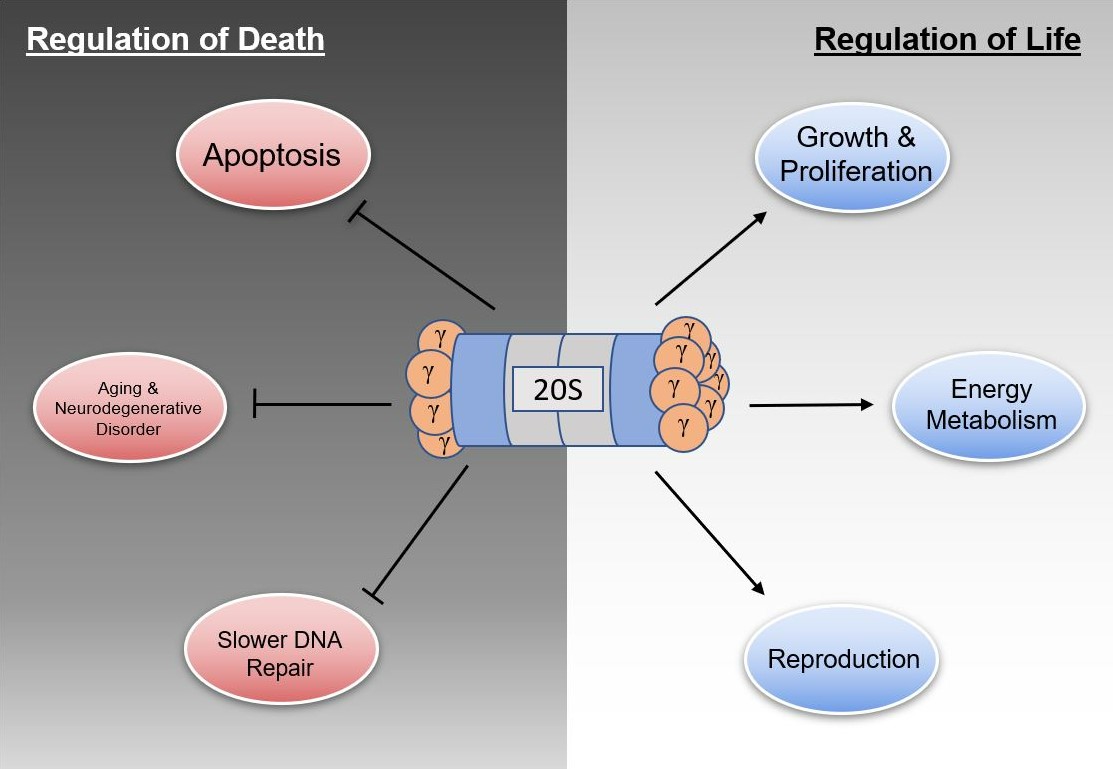 The study also has implications for cancer research. Because REGγ is involved in the regulation of several tumor suppressors, overexpression of the proteasome activator can lead to tumor formation. Hence, recent studies have proposed REGγ as a focus for anticancer-drug development.

“My hope for this paper is that it brings more attention to REGγ in general,” said Funderburk. “This attention could ultimately lead to drug creation that can target REGγ and stop cancers.”

Funderburk began research for the review paper at the beginning of the year, while enrolled in the Integrated Science Capstone course for his biology major. He chose the topic after finding inspiration in his professor’s research. “I looked into what research Li did, and it was really interesting,” Funderburk said. “So I went ahead and asked him if I could write the review with him.”

Li was more than happy to supervise Funderburk. “Keaton was a very motivated student,” Li said. “He’s an avid reader and a very quick learner. He read more than I even asked him to.”

After the capstone course, the pair continued work on the paper with a goal of submitting it for publication. They worked long-distance throughout, with Funderburk on NYU’s New York campus and Li on the Shanghai campus. The student and professor went through ten rounds of edits between them before finally submitting the article to a journal.

“It was like a full-time job,” Funderburk said. “It was a huge commitment.”

Kang has watched Funderburk grow as a researcher and learner since his sophomore year. “In my Foundation of Biology II class, Keaton was an attentive and curious student for general cell biology and performed well,” Kang said. “In his senior year, he dedicated significant time to write his capstone thesis, which makes his capstone writing excellent.”

Currently, Funderburk is home in Nashville, Tennessee, where he plans to work as an EMT while preparing for medical school.