Leading economist and 2003 Nobel Laureate Robert Engle has agreed to serve as Co-Director the Volatility Institute at NYU Shanghai (VINS). Engle, a professor of finance at NYU Stern and founder of Stern’s own Volatility Institute, has served on the advisory board of VINS since its founding. This summer, he will take up co-director duties alongside Professor of Economics Wang Jianye, managing director of China’s Silk Road Fund.

“Robert Engle invented the Volatility Institute and made it the world’s preeminent resource for analyzing systemic financial risk. When NYU Shanghai launched VINS, Robert helped ensure that it applies the same rigor in studying local data”, says Vice Chancellor Jeffrey Lehman. “His agreement now to serve as Co-Director shows just how far VINS has come in a very short period of time.”

Engle says he is excited about his new role and is looking to “increase the [Institute’s] research contribution and outreach to the Chinese finance community, and help VINS become more effective in engaging and reaching out to students.”

Established in 2014, VINS researchers work to provide thorough, scientific, and transparent analysis of market risk and volatility. The Institute aims to understand the dynamic China market, and how it influences and interacts with markets around the world.

The unpredictability of Chinese markets makes Shanghai a perfect laboratory for economists to experiment with predictive models. In 2015, Robert Engle and Zhou Xin, the executive director of VINS, used Engle’s ARCH model to predict the pricing of the first options offered on the Shanghai Stock Exchange. The results reflected a very narrow margin of error.

“With Robert Engle as the Co-Director of VINS, we will be able to contribute in a more meaningful way to the development of China financial markets,” said Zhou Xin. “We currently plan to work on a series of projects that analyze volatility and risk premiums in Chinese financial markets.” 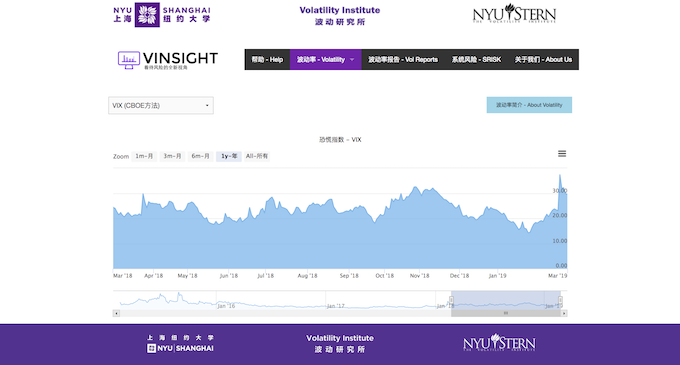 Last November, Engle was a keynote speaker at the fourth annual VINS conference at NYU Shanghai. At the conference, he proposed a three-step action plan that could help the Chinese market mitigate the geopolitical stress it is currently under. Step one: “reduce debt,” step two: “reassure investors,” and step three: “reopen trade negotiations”.

Two VINS events will be taking place this month: On March 19, Professor Wang Jianye will speak China and WTO Reform. Martin Wolf, associate editor and chief economics commentator at the Financial Times will speak on China in the World Economy: Co-operation or Conflict? on March 20.