Could you remember enough about a stranger you saw from 40 meters away to make an ID in a police lineup? What about 100 meters? If you’re confident about your vision and memory, a recent study published by NYU Shanghai Professor of Psychology Pekka Santtila in the leading journal, Law and Human Behavior, might shake your confidence.

“In criminal trials, if [a defendant] says the witness is very unlikely to be accurate, he or she will very probably be challenged by prosecutors [who say] ‘but is it still possible,’” Santtila said. “It’s good to have an absolute threshold, so that you can say ‘it’s impossible.’”

To discover this threshold, the research group recruited more than 1,500 participants ranging from six to 77 years old. Such a large and wide population sample size is rare in eyewitness studies, but researchers were aiming to make the results more representative and applicable to the general population. Researchers also deployed real people to act as targets for the “witnesses.” Most past studies had only presented photos or videos to their subjects.

In the study, participants were required to watch four people, one at a time, at four distances ranging from five to 110 meters. They were then presented set of photos, either sequentially or simultaneously, and asked to pick out the people they had seen. 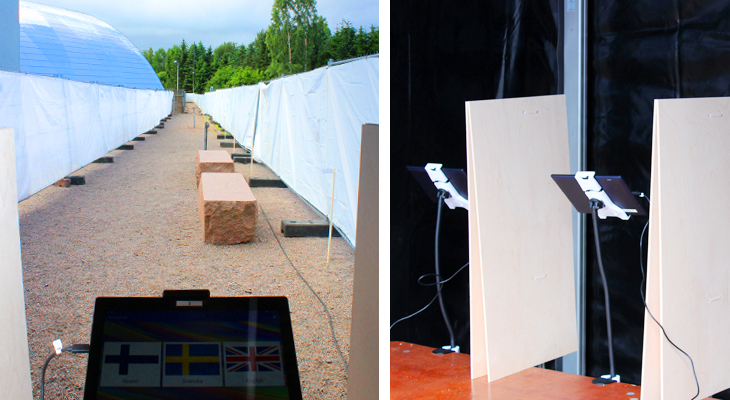 Targets appear at different distances in the pathway and participants do the identification task on the screen in front of them.

The 100-meter threshold does come with some caveats. Since the study was conducted in an optimal environment, the threshold in real-life cases may be much shorter. Santtila said that lighting, the offender being of different race than the witness, the level of violence at the crime scene, and the individual variances of memory and recognition capability, are all factors that warrant further study.

Santtila, who has been exploring how the accuracy of eyewitnesses is affected by various factors since 1995, said he is especially interested in investigating how quickly cross-racial identification ability can be improved. “NYU Shanghai is an interesting lab for this,” Santtila said. He has already conducted a pilot study on cross-racial identification accuracy, and plans to launch further studies.