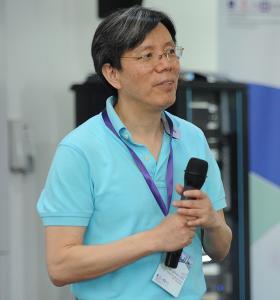 Fanghua Lin is an Aﬃliated Professor of Mathematics at NYU Shanghai and a Silver Professor of Mathematics at the Courant Institute of Mathematical Sciences, NYU. He holds a B.S. from Zhejiang University and a Ph.D. from the University of Minnesota. Professor Lin's research interests include classical and applied analysis, partial diﬀerential equations, geometric measure theory, and calculus of variations. His books include Geometric Measure Theory: An Introduction (with Xiaoping Yang - Science Press - 2002), The Analysis of Harmonic Maps and Their Heat Flows (with Changyou Wang - World Scientiﬁc - 2008) and Elliptic Partial Diﬀerential Equations (with Qing Han - Courant Institute of Mathematical sciences - 2011). In addition, he has published more than 180 original research articles in top journals of mathematics, including Annals of Mathematics, Acta Mathemtica, Journal of the American Mathematical Society, and Commutations in Pure and Applied Mathematics.

Professor Lin is a Fellow of the American Mathematical Society and the American Academy of Arts and Sciences. He has been awarded the Alfred P. Sloan Research Fellowship in 1989, the Outstanding Young Researcher award from NSF-China in 1998, the Chang Jiang Chair Professorship from the Ministry of Education of China in 1999, an Oversea Assessor for Chinese Academy of Sciences in 2002, the M. Bocher Prize of American Mathematical Society in 2002, the S.S. Chern Prize at ICCM in 2004 and a 1000-talent (short) program in 2007.